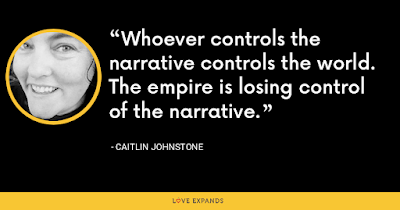 An excerpt: The oligarchic empire is working harder and harder to bolt down our minds in service of its agendas. Silicon Valley is working more and more openly in conjunction with the US government, and its algorithms elevate empire-authorized narratives while hiding unapproved ones with increasing brazenness. The mass media have become so blatantly propagandistic that US intelligence operatives are now openly employed by news outlets they used to have to infiltrate covertly. NATO and military institutions are studying and testing new forms of mass-scale psychological manipulation to advance the still developing science of propaganda. A transparently fake “whistleblower” is being promoted by the US political/media class to manufacture support for more internet censorship and shore up monopolistic control for institutions like Facebook who are willing to enforce it. Wikipedia is an imperial narrative control operation. They’ve imprisoned a journalist for exposing US war crimes after the CIA plotted to kidnap and assassinate him.

VICTORY FOR 'THE GOOD GUYS' - Thank You Dan Dicks (pressfortruth.com) & your entire team, for your work, & 'Love of Humanity' (& to BitChute, for sharing) . . . An excerpt: Operation Save The Press (For Truth)! ➜ https://gogetfunding.com/operationsavethepress/  Chalk one up for the good guys today folks, we’ve successfully countered their propaganda and forced them to admit to their lies!! Health officials in Alberta falsely claimed that a 14 year old child died due to Covid-19(84) when that was the farthest thing from the truth and they are now forced to do proper reviews in the future when it comes to determining an actual cause of death…winning! In other news Dr. Sanjay Gupta the chief health official at CNN did a 180 after appearing on the Joe Rogan podcast doubling down on his stance that Ivermectin is not a reliable medication for people who have “contracted” Covid! And finally we’ll look at a new epidemiology paper that proves that higher vaccination rates are NOT linked to fewer Covid-19(84) cases. In this video Dan Dicks of Press For Truth covers the latest Covid-19(84) news while celebrating a victory that we’ve just achieved on the side of truth, liberty, freedom and justice!

Thank You James & James (corbettreport ... & ... mediamonarchy) for your work, & 'Love of Humanity' (& to Bithute, for sharing) . . . Hell-Escape to Freedom . . .  An excerpt : This week on the New World Next Week: Merck aims to push pills for the scamdemic; Alberta releases its REP vaxx app; and FreeTheNationMusic.com music brings together musicians who oppose forced vaccinations and segregation.