This was to be the first major highlight of my journey........ and it surely was! The Cedar Rapids Kernels - now an Anaheim Angels farm team - were playing an afternoon (2pm) "Memorial Day" game vs Quad Cities River Bandits. I identified myself at the ticket booth as a former player from 40 years ago. The "ticket booth lady" went and got her boss and I was given a free ticket and a wonderful tour of the new "Veterans Memorial" ball park - air conditioned box seats and all. Seth Dohrn is the man behind the "history"associated with Cedar Rapids minor pro baseball. He showed me artifacts & memorabilia dating back to the turn of the 20th century. I also saw my name on the 1972 roster - signed a baseball for Seth's collection. I also got to do a live/on air interview during the 6th inning by the radio station who carries the games. I told him I was probably the worst player to don a Cedar Rapids uniform - that broke the ice. I told about my trip and charities that I was promoting. I must say thanks to Seth and thanks for the memories. You have great passion in what you do and it shows. And "Thank You" Cedar Rapids Kernels. Check out Seth's blog, about my visit here. Below are pictures of the stadium and one of Seth and I. 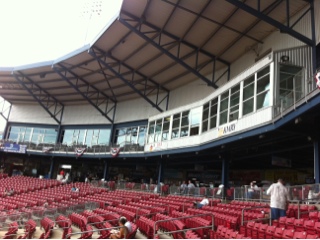 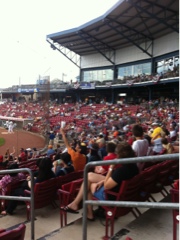 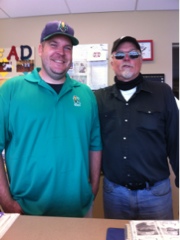 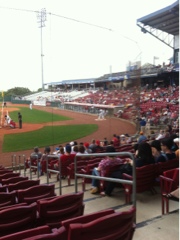