I Found An Old "Friend"

Last evening, while going through some old paperwork from "wunderlust2012.com", I came across a "web site" of an old friend - I met on my journey. His name is Monte. We met by chance, at "Bell 2 Lodge" on Hwy 37 (the Cassiar hwy), in northern British Columbia, Canada. We (Sarge, Monte & I) were delayed due to a "spring wash-out" of the Alaskan Highway - between Watson Lake & Whitehorse, Yukon, Canada. Monte gave us a "heads-up" that the wash-out would be lengthy; and he was headed south to bi-pass the problem - via ferry at Prince Rupert. "Bell 2 Lodge" was the only fueling / lodging facility till Watson Lake, Yukon & facilities there were full - with police turning everyone around. Sarge & I would eat and adjust our plans, as well. Monte was leaving right away. Monte rode a new 800 BMW GS - loaded for bear. We then parted - Sarge & I went into the Lodge restaurant - for a late breakfast. Looking out the window in the drizzle, Monte was taking his helmet & jacket off. He was quite tired & wet as he had slept outside the Lodge that night - in steady drizzle. He commented, that someone had pulled up in a car & slept the night - right in front of him, & hadn't offered him shelter from the rain. I could sense that Monte was agitated by this (I would be too). He was very tired. You might ask why - with only this short & chance meeting - I consider him my "friend". I don't have too many, that I consider to be a "true" friend. For-the-most part, I think "guys" are like that (sorry ladies). I think it's our "warrior spirit" instincts, that dictate if "trust exists". We don't let our emotions be felt - because we might have to try & "kill" one another. Sounds barbaric but true! I could sense - right away - I wanted to be his friend. Monte, came into the restaurant and joined us for breakfast. It was an "emotional" meeting. What a truly "great" human being. He was on a "solo" trip as well - to visit friends along the way. Many with "health issues" from the "service". Monte had been a "Squad Leader" with the "United States Marine Corps" & been awarded the "PRESTIGIOUS" "Purple Heart". This came out during the two (2) hour conversation we had - by accident. I could sense he was very "humble" discussing this - when so many of his friends - were unwell. He mentioned that after going to Alaska; he was going south via Minnesota: and then to South America. One of the "highlights" of his journey - was to present HIS "purple heart" to his friend & fellow Marine - who was dying. I'll always remember what he said - something to this effect; He said: "The "Purple Heart" means more to him; having his friend have it; than him having it, on his own wall." Thank-You "Monte Notton" for your service to "MOTHER EARTH"! Visit Monte's Web Site @ "www.mike31america.wordpress.com". 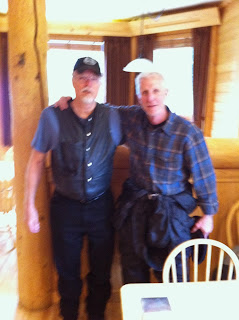