Today, I left Pincher Creek, AB. at 7 am. Soon, I was back into the mountains, of British Columbia and riding thru the Crowsnest Pass. Very beautiful scenery! The U.S./ Idaho border cross was uneventful - not too many tourists! Shortly after I crossed the border, I met yet another "Solo" biker. This motorcycle - pulled along side me; in stop & go traffic - due to bridge construction. The biker, was riding a BMW 650GS (dual sport), and from a brief discussion - was returning home - from Alaska to California. If you ladies (reading this blog), think only men ride "solo" (& to Alaska); think again. "You All", now have a CRAZY "role model", to look up to! She also, has done "the Dalton" - one mentally tough women! She goes by the handle "RAD GIRL" - on her license plate. I found out the "real reason" for her nickname - "Rad Girl" -when we stopped at a Service Station - up the road. She works in a Medical Clinic - as a Radiologist, thus the short form "Rad". Her real name is Cynthia. I told her, my ride was to promote "Cancer awareness" - for 3 Cancers. She said: "She had recently lost her brother to "colon cancer" and was finding it difficult - coping with the loss"". In her job, she deals with mostly cancer patients. It's a small world!
Anyways, when she asked about my trip; where I'd been, etc, etc - I said: "I was on the down side of 12,000 miles -and, also had been to Prudhoe Bay, AK." (This is the funny part.) On her way back down - in Smithers, BC., she met other bikers, who had been on "the Dalton". They mentioned/& couldn't believe, seeing a Harley ElectraGlide (Dresser) - on "the Dalton". They even said "It was green & very dirty - and would take days to clean!" They couldn't believe it! They were still talking about it, in Smithers, BC.! She said: "You are THAT guy"! I didn't know, whether to feel "proud" or to book myself into the nearest "Mental Institution". I said to her, what I have said before; "If it's not in your "comfort zone" - Don't do it""! Cynthia, understood, exactly what I meant. We took some pictures; hugged and told each other - to keep the shiny side up! Another, "solo rider" memory. We are a "unique breed". Soon after, Lewiston appeared. Tomorrow, I have an appointment - for an "oil change, rear brake pads and rear tire". Also, I will check out Lewiston, ID. Pictures include "Crowsnest Pass, BC.", "Lewiston, ID & Snake River" and "Rad Girl". 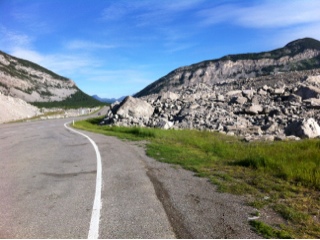 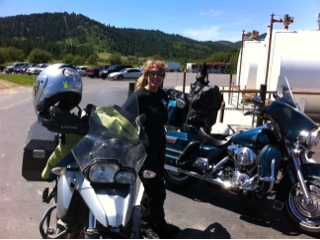 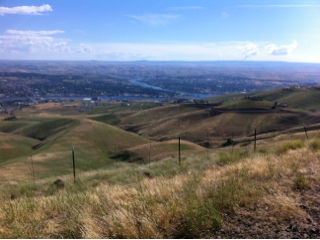