First, a little history on Coos Bay, Oregon. Back in 1971 (41 years ago), when I played baseball for Lewiston Broncs - of the Northwest League - Coos Bay had a team, affiliated with the Oakland A's. I remember Coos Bay being the worst place to play baseball. First of all, it was a 12+ hour bus ride from Lewiston, Idaho and being on the Pacific coast, it was always cold & the fog would roll in around the 6th inning; making it difficult to see the ball. To make things worse, the ball park was located near a pulp and paper mill - resulting in a putrid/dead pigs kind of smell. Anyways, why I brought this up was, I asked several of the locals if they still had/or remember having a pro baseball team. No-one remembered. The ball park, which was near the Best Western Motel, where we (players) stayed is no-longer - but the Best Western remains and looks basically the same. I was thinking maybe Coos Bay was only in the league, that year ('71) I was out there, but after "googling Northwest League", I discovered Coos Bay had teams from '70 - '72. It seemed kind of sad, it is all but forgotten - but such is life! Today, other than reminiscing about baseball days, long ago, I made it thru Oregon to Tacoma, Washington. Quite an uneventful day but with no rain! Tomorrow morning, I will find a motorcycle shop and get the oil changed/new plugs, etc.. I will be crossing back into Canada, in the afternoon and then it's "North to Alaska". Just a couple of pictures today (along the Oregon coast & where I stopped for lunch & had a "black bean chili dog with fries"). 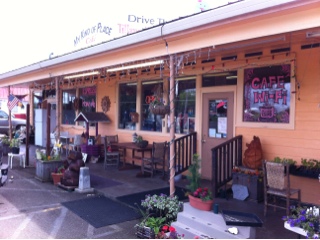 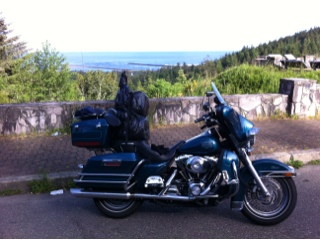