Yesterday and today, in northwest British Columbia, was very wet and cold. Yesterday morning, we rode west on Hwy #16 from Houston, then north on the Cassiar Hwy #37 - amazing scenery. We had to use some of the extra gas we were carrying; since one of the fuel stops had locks on the pumps - and the building completely destroyed. We saw eight black bears - probably would have seen more but we were concentrating on the wet road ahead. Snow was in the ditch and amongst the trees as we rode thru various mountain passes. Rivers were high - waterfalls gushing down the mountainsides. Spring had arrived! When we arrived at our next fuel stop - called "Bell 2 Lodge", several people were talking of the Alaskan Hwy road closure due to a major "washout". The Police had the Hwy closed at Watson Lake, Yukon & were turning people back; Watson Lake is where #37 Hwy connects to the Alaskan Hwy. Any motels there would be full - we were stranded! We would stay at the lodge and hope the road would reopen soon. The lodge consists of a group of cabins, a restaurant, 2 (regular) gas pumps, and one TV - & is powered by a generator. Phone service is by satellite (no cell). Cost was $200+ / room. One night would be long enough to stay there. 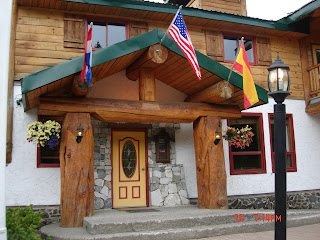 This morning, we met another biker (Monte) also heading to Prudhoe Bay, AK. He had been turned back and decided to take the ferry from Prince Rupert, BC to Haines, AK - just north of Juneau. After debating the pros & cons of "waiting out" the washout repair - we decided to backtrack (360 miles) to Prince Rupert and take the ferry - and bypass the problem. It is hoped, by the time we complete the run to Prudhoe Bay, the road repairs should be completed. That's the plan! Biker Monte, made his Alaskan Ferry reservation yesterday and departs tomorrow @ 4pm. We couldn't get on that boat. We leave Thursday @ 6 am. Still better than waiting it out at Bell 2. Tonight, we're motel-ling-it in Prince Rupert. A couple of photos along the way & of the Bell 2 lodge (above). Did I say it rained all day! 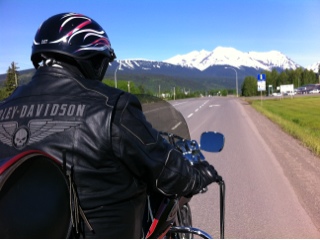 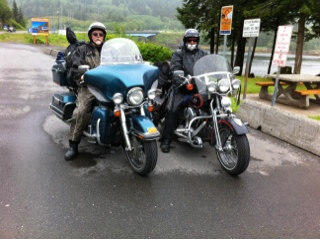 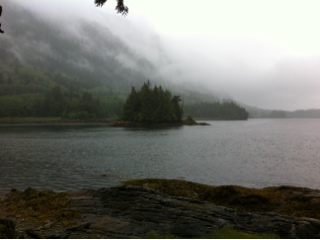