Yesterday (Saturday), started with a bran muffin and coffee - at 9 o'clock in the morning. I had intended to get up early - get a good start - and do 600 miles. I quickly changed to plan "B" - get up late and do 400 miles. A "biker" has to be adaptable & flexible! Also, the benefits of traveling solo.
Once underway, with the cobwebs cleared, I enjoyed the spectacular landscape of the Yukon Territory. There was much construction & dust - but no rain; just blue skies. I can't complain - compared with the rain & cold, a couple of weeks ago. I saw, where the road had been washed-out - with trees and debris piled high, along the sides. Mother nature, sure can take her toll!
It was a day - to daydream. There was virtually no traffic. That, together with the spectacular scenery, created a "perfect storm" - for one's mind to wander. The road construction, interrupted my thoughts - which was probably a good thing. I better stay focused on the task at hand!
After Whitehorse, a motorcycle - went speeding past. Not uncommon for me, as I don't run over 70mph. Anyways, after about an hour, I noticed the same motorcycle - going slow. I passed and thought nothing of it. JUST then, I had to stop for construction - one lane of traffic. The bike pulled up beside me. He had just run out of fuel! He said "the last two gas stations were closed!" I gave him some gas - he would make it to the next fuel stop. Incidentally, it was just over the hill - how ironic! I carried on. It was about 8:30 pm - time to get lodging. In Watson Lake, Yukon, the prices were $100/night. I checked several - most had "No Vacancy". That was too expensive! I better get the tent out. Then, as luck would have it - Rodrigo (the biker who I helped with fuel) appeared - he had found a room - and was looking for food. We would share his room - what a deal! I escaped tenting, again! Isn't it funny how good deeds come back! Thank You, Rodrigo! Incidentally, Rodrigo is from Brazil & has also just completed the "Dalton Run - to Prudhoe Bay." He is on his way home to California. Below are some pictures of the great scenery , a couple of Whitehorse miners (bikers) + Rodrigo & I. 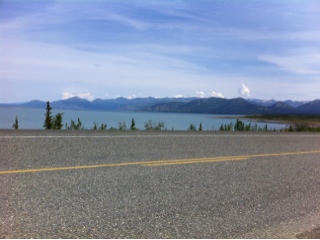 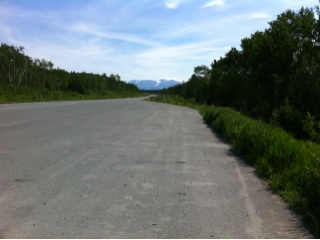 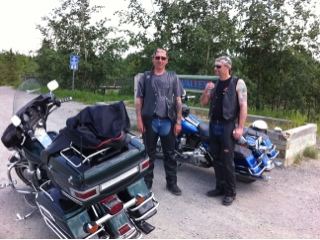 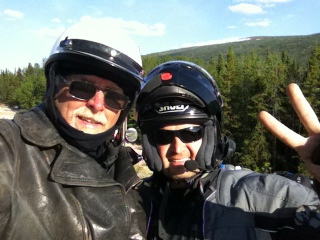