This certainly is a very challenging ride; we're half done. We'll head back to Fairbanks tomorrow morning, after the "Arctic Ocean Tour". Just 492 miles to go. We'll do it in two days - as before.
Yesterday, we made it as far as Coldfoot camp - the halfway point to Prudhoe Bay. It serves as a work camp for the Dalton Road construction workers in summer - with buffet style restaurant, fuel and lodging. In the winter, it is only a fuel stop. Coldfoot, initially was part of the surrounding "gold mining" community at the turn of the 20th century.
The ride from Fairbanks to Coldfoot was wet for the first 50 miles - then it was beautiful the rest of the way. It got quite warm too - 75•F. Fifty-five miles south of Coldfoot is the Arctic Circle - we stopped there for pictures and chatted with others - similarly proud of their accomplishment. When we arrived at Coldfoot, we were very tired. The 240 miles of poor road conditions gave us quite a workout. The Dalton Hwy consists of: soft muddy sections, loose gravel, big stones, crushed rock & small boulders. Some of it was paved, but winter's extreme frost had got the better of it and it had heaved - with soft spots everywhere. Road construction was running 24/7 (two 12 hr shifts) - to get it repaired. From discussions with several construction workers awaiting shift change, it is a never ending, losing battle. Many trucks too! Rocks flying everywhere - very dangerous! Many of the workers, rallied around Sarge and I. They don't see road bikes like ours, up there. One husky 6'4" truck driver, with long hair, insisted we go over to his table, so we could meet his friends. He introduced us by saying: "These guys are REAL bikers". Everyone at the table stood and shook our hand. We felt honored, I guess! They also identified some particularly bad sections of the road to watch out for - saying the next 252 miles were much worse. Very helpful, I suppose, but to us, it all seemed bad.

By 7:45 this morning, we were back on the road again - heading north to Prudhoe Bay. Twenty miles up the road, we found the construction gang - working a 20 mile section, with one interrupted lane of traffic. As we passed, the truckers and heavy equipment operators had big smiles and were waving. It felt good to be accepted by these hearty souls - we were out there with them, against the elements. Yes, as we went further north the roads did deteriorate. Sarge took a rock off the bridge of his nose, from an oncoming truck - his windshield isn't as high as mine. Luckily, his protective glasses lessened the blow! He still had to stop and collect himself & check the damage. A nice lump on the side of his nose. He will survive!

We saw many animals, including a grisly bear, a moose, many musk oxen, and many caribou. The tundra surrounded us; the Brooks Mountain Range was cold, with snow - but no road closure; we lucked out! 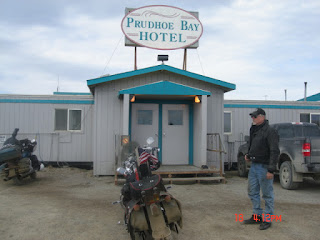 Upon our arrival this afternoon at the Prudhoe Bay Hotel (also a work camp/lodging facility), we were greeted by workers on shift change - to the oil fields. They commented that ours were the first Harley's they had seen there. We were very tired - the motorcycles very dirty. Our tires quite worn, but will last. We will eat and rest now. 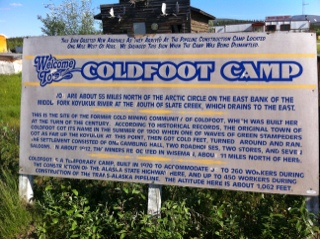